Yeah... you read it right. Surgery Day... We have been dreading this day, trying to postpone it, and trying alternative ways to not have to go through with it. Since Zenock turned one, he has had really bad ear infections along with a LOT of fluid behind his ears that just wouldn't drain. Our doctor here decided to send us to an ear, nose, and throat specialist, because he was worried that it was starting to interfere with Zenock's speech development. We took him to the specialist a few weeks ago and found out that he wasn't hearing really well, (which is why his words are so jumbled up). They told us it was as if he was having a conversation under water. He responded well to voices, but when it came to sounds he wasn't hearing until the 40th level. (They consider between 1-20 normal!) We decided to go ahead with the surgery... and to have Ear Tubes placed in Zenock's ear to drain all the fluid. It was a very small, simple, COMMON surgery they told us. I would say it was probably most traumatic for me the mother. I called my Mom last night, totally freaking out, crying, and wondering if I was doing the right thing. I don't know his pain level, I don't know if he can hear, and I don't want to do an unnecessary surgery... (even though the doctors tell me it is.) The thought of putting my baby under anesthesia was really freaking me out! Heck, I freaked out when I had to go under anesthesia! I even left instructions in my journal... (seriously, I know, laugh all you want.) BUT, this... This was MY Baby, my little boy. How grateful I am for the priesthood in my home and blessings of peace and comfort! :) 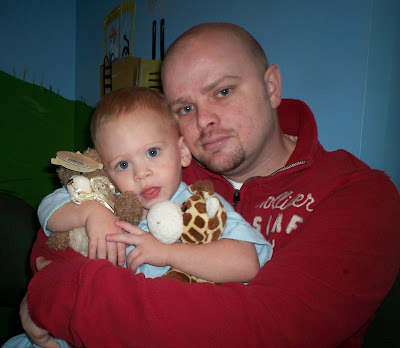 We woke up bright and early to get to the surgical center on time. While waiting for the doctors, we got to play for a little while in this adorable play room they have for the kids. The nurses were so good with Zenock and even gave him a cute little teddy bear to take home with him. I sure love these two boys. I'm sure if Zenock were older, he would be telling me to, "Just Chill Mom," just like his Dad kept saying. 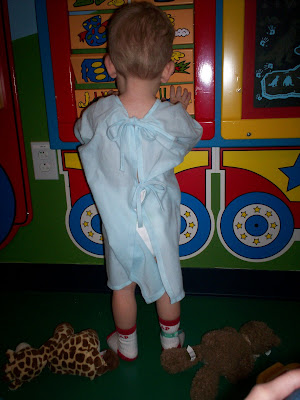 His little hospital gown was too cute. I wish they would have let us bring it home! 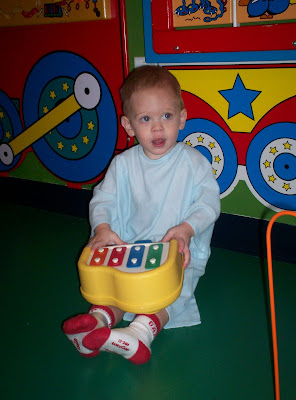 Zenock, Our little Beethoven. He loves music. He got a keyboard for Christmas and his Dad has already hidden it away in the closet. I secretly pull it out while he is at work. I love lots of happy noises. 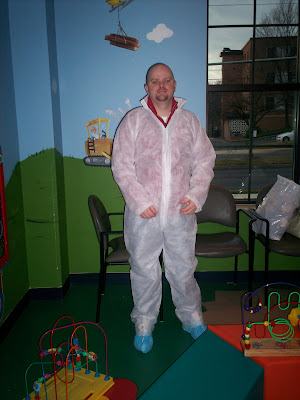 They let one of us go in with Zenock until he fell asleep. I jumped and said, "I WILL do it." After, a few minutes in the waiting room, JC said... "Are you sure you can handle it?" It's probably a good thing too, because I don't think I could have. I wouldn't have been able to let go of my little guy. 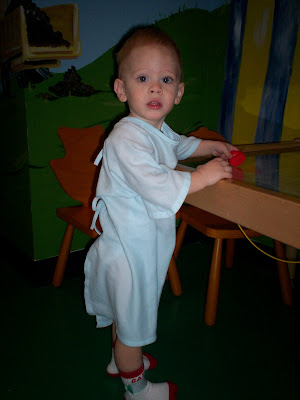 They had so many fun toys to play with. I felt so guilty knowing that my little boy had no idea what was coming. 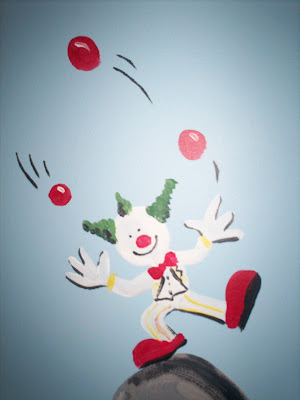 JC had me take this picture of part of the mural on the wall.... This is for you Kami. :) 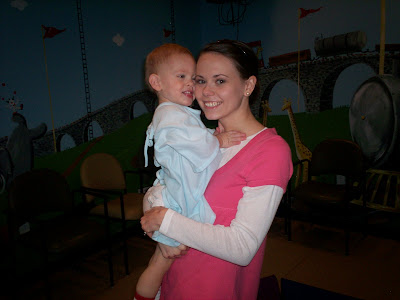 So, I know there are LOTS of kids who have had ear tubes and this surgery. AND, I know I make it sound so much more traumatic than it really was. The surgery lasted about 5 minutes. It usually takes 20 minutes for a child to wake up from anesthesia (or so they told us...) Zenock was awake in FIVE. When we went into the recovery room, a nurse was holding him and they were watching a "show." Zenock was smiling and pointing at the TV. It was hilarious when he saw us.

They made us stay a half hour for recovery and sent us home. AND, since we have been home, Zenock has been his normal happy little self. He is doing great! All that freaking out for nothing.... What was I thinking?!? I do need to Chill...

Joey got tubes in his ears on Dec. 23rd. I guess he is my 7th child... I didn't get any pictures of him or anything. LOL!!! So far so good with us. He is my first to get tubes, well besides Shawn a week or so before Joey. Glad things went well.

You know, I had surgery on my eye (at least once) when I was about four years old, around 1980. I have a scar on my knee (it was some kind of skin graft, I think), and my right eye clicks when I open it. I can also see double whenever I want to. I still remember the smell of the ether, but other than that, it really wasn't a big deal for me.

But Mom and Dad probably know what you went through.

I also had surgery to get my tonsils out about the same time.

I am glad to hear everything went so well for Zenock! He's so dang cute in that hospital gown.

I don't blame you at all for being scared for you little boy. Thats what good mom's do. Sounds like he was a trooper though.

I am glad that everything went well. It is scary to see your kids go through anything like that! I think you are just a normal mom! :) I hope it helps with his speech too. :)

Ethan had tubes in his ears when he was one. It was the best decision we ever made. He hasn't a single ear infection since and it will bring you a lot of peace if mind that your little one won't be in pain anymore.

I am SO glad that everthing went okay! I am sure I would have been totally freaking out! My brother had tubes in his ears growing up, and they weren't that bad. I think my niece is going to have to get tubes as well. She's 2 1/2 and her speech is pretty jumbled. But, you are super-strong and way to make it through the surgery!

its scary when its your child goin through! I know how you feel, conley had to have surgery on dec 12. it was the worst day for me! Im glad everything is good now though.

I'm so glad things went well. You're such a good mommy!

It is NO fun seeing our little ones go through things like this. I am glad that to hear he handeled it so well!! You are such a good mom Carin...Zennock is very lucky!!

Glad the surgery went well. That had to be the worst day of your life!!

Ohhh, its so hard especially when they're just little guys. I'm glad it went really well. He looks so adorable in his tiny gown.
Hope he heals fast, he's a cutie.

Hey Carin! I have been secretly stalking you through aubreys blog and think your blog is adorable. I haven't been able to comment because I didn't have an account but I finally got one, yeah! Hank had to have surgery in november and I know exactly what you are talking about, very scary! glad all went well. when I get my blog up and running I will let you know, I still have your email. destri

Poor little guy, (and mom) I am glad that it all went well and it will be great to not have any more ear infections! I am glad that you guys had a great Christmas - isn't it so fun!

Lucas goes on Monday for his SECOND consult. The first time we backed out! But he got a double ear infection when he got pneumonia last month and he's been tugging on his ears ever since. He still has fluid in his ears 3 weeks later. I'm really nervous about it, but I figured this would come eventually. He's had almost 2 dozen ear infections. It's so sad. I'm glad to know everything went well with Zenock. It makes me feel better about Lucas'.