Last night we went to a little Halloween costume party for a mom's club I joined in our community. I ordered Zenock's costume a little late this year and it still hasn't arrived, so we had to get creative and come up with something quick so Zenock could go. I had the idea of a baseball player and then JC decided we needed to make him a certain baseball player.... of course one who plays for the Dodgers. (I forgot my camera, so I had to take pictures of Zenock after the party... that would be why he has watermelon ALL down the front of his shirt...)
Meet our little Manny Ramirez 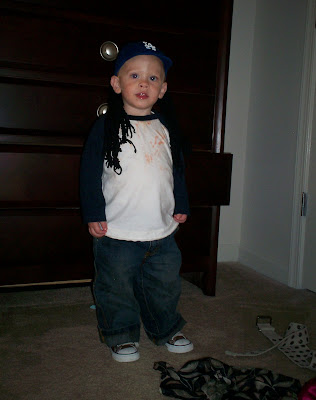 He even kept the hat on the Whole time... He wears hats all the time, just not one's with Dreadlocks hanging down from them. 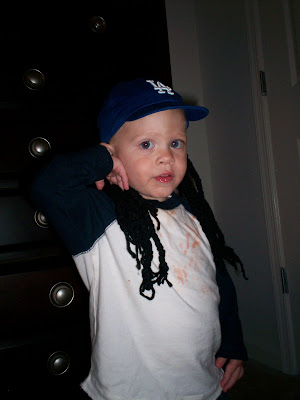 He is definately cuter than the real Manny. 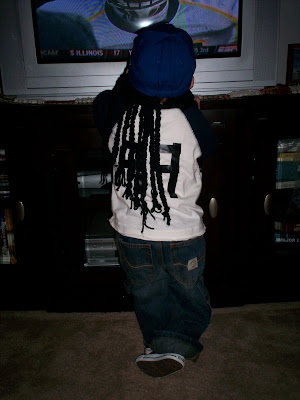 Manny checking out the score on the game.... 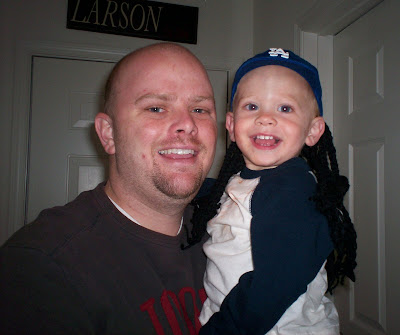 Daddy and OuR little MaNNy!

Hopefully, this week will be a little slower than last week!

This is hilarious! I laughed so hard when I got JC's text. Very creative. I am impressed. :)

Too cute . .and very creative! Craig is a huge Dodgers fan too so we have a lot of pics of Jace in Dodgers stuff as well.

Cute costume - you guys are good! How did you make those dreads?? i think I am going to make that same costume for Russ to wear. He's not a huge fan of costumes so I think he could actually handle a hat with "dreads" on it. You guys are always having so much fun!!

How is JC liking the program??

What a cute little guy you have! WOW you are so creative as well I love it! He has the cutest little smile! What a kid I hope that your day and week go slower for you. Have fun!

Too cute! This made Shawn and I laugh! I cant believe how much older Zenock looks even from the last time we saw him!

HAHAH SO awesome!!! HAHAH! Your son is so adorable!
BTW I shoot with a Canon 40D and I loooove it. :)

So creative and so funny! I LOVE it!!

Carin! it was so good to hear from you! thanks! your family is adorable! im glad things are going great for you! keep in touch!